With the title of Chosen One up for grabs, the Hartvane sisters have trained and studied at Shadecoral's temple to the merfolken gods for as long as they can remember. Harmonia, who works with her Papa in the kelp fields, makes up for what she lacks in focus with her enthusiasm, while Melodika helps Father in Shadecoral's cozy library and has read most of the books in it, to the detriment of her social life in town. When the day of judgment arrives a few months shy of their twenty-fifth birthday and the twin mermaid sisters are separated by the naming of the Chosen One, both are flung into their own adventures, separated from each other. One sister follows the path set before her under the overbearing eye of a cruel mayor, while the other takes her fate into her own hands, making herself an outcast to her hometown forever as she does. In their own way, whether they know it or not, they are both are working to make the ocean a safer place.

Meanwhile, above the waves on the Elven continent, the queen has announced that she is expecting a child. This means that the current youngest and heir to the throne, the spirited Princess Prudence, in need of a new direction in life. At just sixty years old, she finds herself caught between not knowing enough to get by on her own and too old to want to rely on her family's guidance. Not content with her mother's plans for her, she decides to set out as a pirate and try her fortunes on the seas. When Prudence encounters one of the Hartvane sisters at sea, she feels an instant connection, though perhaps there's something deeper at work than either of them realizes. And what about the hot first mate who's flirting with both of them?

The Hartvane Chronicles Book I: The Outcast and the Chosen One is the first in a four-part series, and is packed full of swordfighting, smooching, betrayal, magic, and burnt meals. When the fate of the world is on their shoulders, will the Hartvanes find a way to save it?

Regarding pre-orders: The manuscript is done, and the book only needs a few final bits of polishing before it's released. PDF and EPUB versions will be available, along with audiobook versions for $9.99+ buyers.

In order to download this book you must purchase it at or above the minimum price of $5.99 USD. You will get access to the following files when they are released: 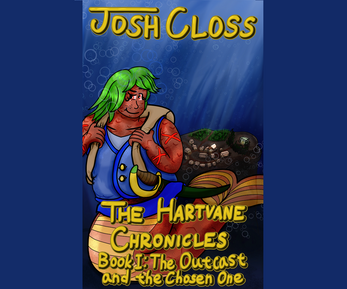